Confident in their creations, their encounters, their picaresque adventures amidst the invisible quest for being, they plumb the polarities between soul and psyche, the paranormal, the supernatural, the B-movie, the lusty sultry, the lucid exuberant chants of transcendence, scintillating syncopated metempsychoses and ethereal laments. They are prolific; they are profound; and they love to sing and dance. 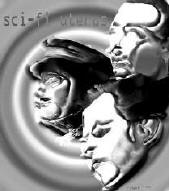 >
It has been said an ancient tablet was once recovered, it’s message broken, its implications haunting:
TO LOOK ONTO THE LAST SUNRISE IS TO FIND…
the message stimulated a profound dread for the world’s outcome and an exuberant sense of horror for what that moment would be like, and for those who would be there for
(unquestionably the most spectacular event in this little corner of the universe)
THE LAST DAY ON EARTH!
DoHo, the only living member of a subterranean survival fleet, surrounded by the last remaining technology on the planet can find no solution for survival, no forecast of the future (his, the earth’s, the universe).
In frantic desperation to grasp some elemental reality he ascends to the earth’s surface. When the mighty doors fly open he beholds…
THE LAST SUNRISE!
The blistering instant drives him into a swoon, inverting his vision, and giving him the first glimpse of the Sci-Fi Uterus.
Two other salient beings (Mystic Antenna Chick and Stif Spring) each in their own outer episodes of search are suddenly drawn into the ring of DoHo’s fantastic glimpse;
for an instant there is a collective psychic transmission in a core the likes of a supernova, mutually felt by each trio member.
They have seized beauty where it has escaped into nether-dimensional holes.
All vanishes as quickly as it came. Mystic Antenna Chick and Stif Spring are expelled to their outer episodes, enchanted nevertheless by the superb illumination they have each experienced.
In a hallucinatory mist immediately following the glimpse an equation is given to DoHo from Nebulon to be inputted into the subterranean tech system;
when the equation is activated future Nebulon Transmissions will return the trio to the Uterus.

Mystic Antenna Chick
Possesses the gift of broadened receptors highly sensitive to underground currents. She is able to channel the song of muses, the agony of souls through aquatic nether world vibrations. Greater and lesser powers seek her divine gift for a number of reasons - some spiritual, some for greater power, all seek a life prolonging source of water.

Stif Spring
A star-tongued troubadour found guilty (by Last World Law) for seeking out the forbidden verse of the Shadow Force, re-writing and performing such verse as his own in Andraga-shama Spectacle (a type of schizophrenic ritual performance long ago outlawed as it drives its witnesses insane). For his punishment he is doomed to roam with a dog bark in search of his voice. In the Uterus he seizes it. 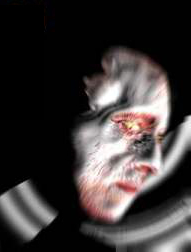 DoHo
Last living member of a subterranean survival fleet and Nebulon Transmission Seer. Witnesses The Last Sunrise thus inverting his vision, providing him a glimpse of the SFU (where Mystic Antenna Chick and Stif Spring also appear for one exhilarating instant); he receives instruction from Nebulon on the way to stimulate further transmission to the negative zone frontiers where Sci-Fi Uterus musically ignites in the last rites of space.